Webster’s defines culture as "A particular form of civilization, especially the beliefs, customs, arts and institutions of a society at a given time."

Family culture is the unique way that a family forms and defines itself in terms of its worldviews, traditions, beliefs, values, capabilities and Brain Preferences. The racial or ethnic culture in which a family lives may strongly influence their culture. Some families are no longer tied to cultural norms of their ethnic or racial group. Every family is different; every family has its own, unique culture. Family Culture is about similarities and differences – legitimate, important differences.

As advisors, developing family cultural competence occurs when we not only discover what the individual family culture of a family is, but we also appreciate the cultural differences of the family.

We generally know strong family cultures when we see them. For example, when we think of the Kennedys, attributes like political service, risk taking, living large, playing hard and working hard, and poise in tragedy might come to mind. In this sense, being a Kennedy means something and it shapes the experiences of the family members over generations.

Every family that is generationally successful has developed a particular identity uniquely its own, but incredibly robust. It is one of the very few things that dynastic families have in common. If family leaders want to raise happy and successful children over generations, developing a strong, intentional family culture is paramount. We see family culture as a constellation of many elements, but fundamentally it is the unique way that a family forms itself in terms of its:

Family Culture Energy Fields
Family cultures or, for that matter, any organization may be viewed as fields of energy that
Exhibit fundamental properties of process, flux and change. These energetic fields are aspects
Of human consciousness manifesting in the qualities of the people and relationships in the
Family, the cultural context in which they meet, and the patterns of their interactions within the
Family and with the world. 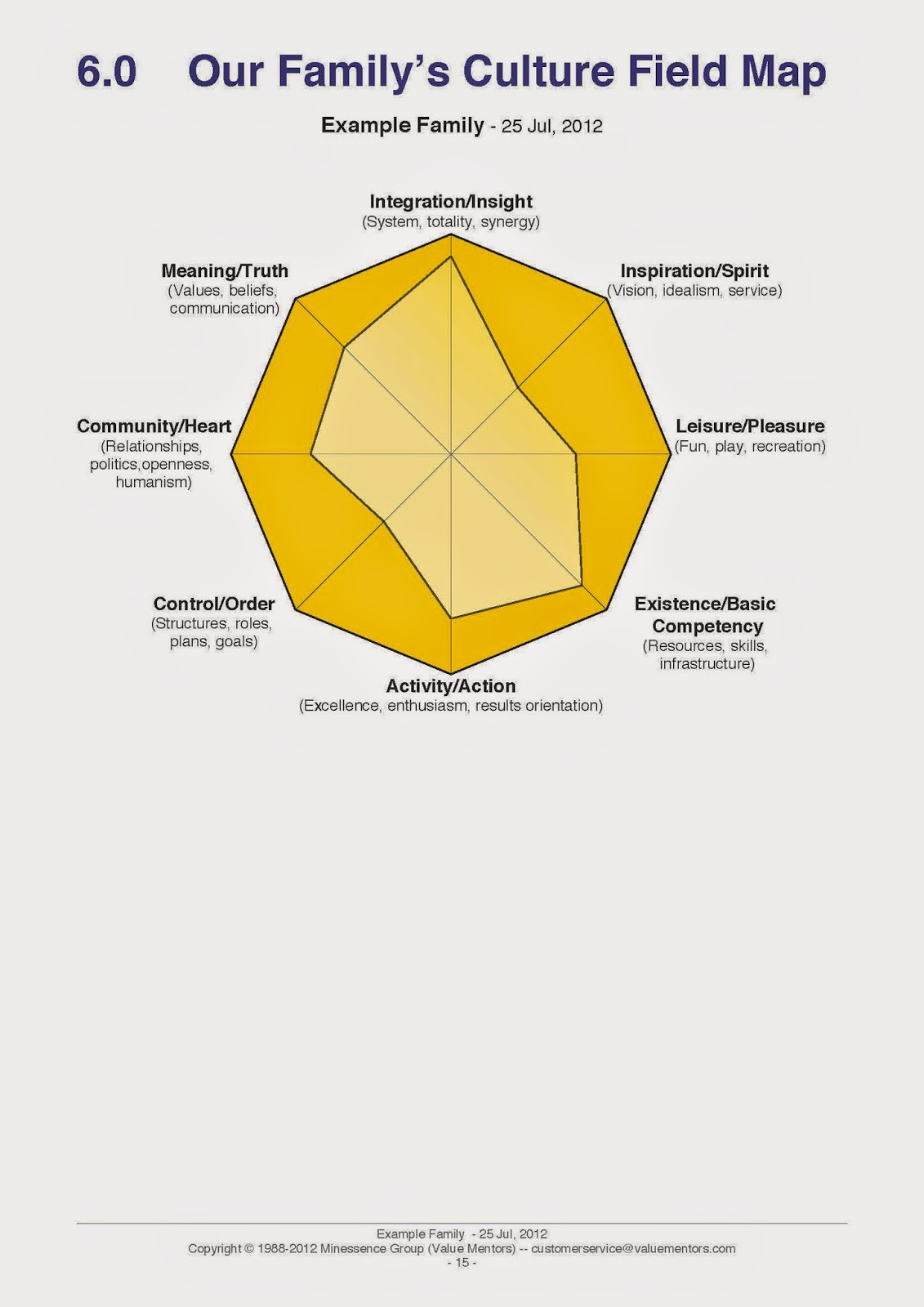 For example, families dominated by crisis and survival/security issues tend to be focused in the
energy field of Existence/Basic Competency. In contrast, families in which a sense of openness
and mutually supportive relationships is embodied would tend to be more active in the
Community/Heart field. Dynastic multi generation families that have become somewhat fossilized or bureaucratized would tend to demonstrate a lack of Inspiration/Spirit and may be focused largely in the energy field of Control/Order.

The Libor Scandal and the Price of Prosperity

Eulogy for My Dearest Friend

I’m sad that I’m unable to be with all of you today in person, but I hope these words in honor of my dearest friend will help to convey both my spirit and support for this community as we make friends with our grief and simultaneously celebrate the life of our beloved Mike.

Mike and I were friends for almost 70 years. I was 7 years old when we first met. He was like a brother to me-the brother I never had.

We met my first day of school in Milwaukee. I arrived a few days after school began in the fall of 1944 and was brought to the 2nd grade classroom at the Milwaukee State Teachers College by my father who was a psychology professor at the school. I remember hesitating at the door to the classroom, feeling both shy and a bit anxious. Dad gently pushed me through the door and I was warmly greeted by the teacher and introduced to the class. All the kids, about 12 or so were siting cross- legged on the floor and I remember a small sea of faces looking at me with curiosity or indifference. But then I saw two of the kids sitting next to each other who were looking at me in a way that I had no words for at that age but would describe today as open-hearted. They suddenly parted, and one of them signaled with a big smile, and “come over here wave” of his hand, pointing to the space between them. I did as beckoned. That kid was Mike and the other kid was Ben Zitron. The three of have been the closest of friends since that day.

As youngsters and later as teenagers Mike and I deeply shared a love of music, Bebop-in particular. We found in Bebop a marriage of heart and intellect that was incredibly seductive. We relished listening to the early music of Bird. Dizzy, Miles, Sonny, Lenny Tristano, and the other jazz pioneers of that era. We also spent numerous evenings together at the very few jazz clubs in Milwaukee. Can you visualize a couple of 14-15 year old finger snapping- head nodding wanna-be arch cool hipster white boys hanging out with the wise but bemused and gentle Afro American jazz musicians who welcomed us into their lairs? I guess you could say we were a bit ahead of our time. Our bible was Norman Mailer’s essay: "The White Negro: Superficial Reflections on the Hipster" which we read and re-read avidly and were fond of rebelliously quoting to excess much to the chagrin of our Jewish parents.

In those days Mike would occasionally be invited to sit in with the legendary Bunky Green quartet. Bunky is one of the great Bebop alto horn players of that era who presciently saw Mike’s talent and potential and was tremendously encouraging.

Over the years, in addition to frequent long phone calls and much later, emails animatedly discussing politics trading the latest gags, and stories of our exploits, I would meet Mike when I came to LA and was able to see him in the recording studio working with his peers both as pianist and arranger. On those occasions I was consistently struck by his natural sense of leadership, usually expressed through his humor. He one-liners would crack up the band and they would, in turn play their asses off, sometimes parodying the charts when the gig was bubblegum music and the microphones/tape deck were off and sometimes when they weren’t. Mike was a beloved mentor to many of those musicians and to many other people as well who were touched by his warmth and decency as much as by his talent.

I remember him calling me when he was elected as the first working musician head of NARAS. He was so excited about the gig and the potential to really educate people about the depth and breadth of the American Song Book and the staying power of real music. Again, Head and Heart combined in Mike so wonderfully as an educator.

I’ve got so many Mike stories to tell and perhaps there will be another occasion to share them. But for now I’ll let it be and simply say that I love you Mike and I’ll miss you terribly. You will remain in my heart as long as I am vertical and maybe beyond.

Gunther
Posted by gweil at 9:33 PM No comments:

Values Mentors & the Minessence Group, in collaboration with the SaintOnge Alliance have successful launched their M & A Cultural Affinity Inventory. The VM-CAI deploys proprietary "ValScan" technology to identify the values existing between merger partners based on a content analysis of cultural documents such as senior leadership speeches, blogs, websites, mission/vision statements, annual reports, etc. This data is integrated with individual and organizational values empirically measured and profiled by the Minessence Group/Value Mentors Executive Values Inventory to provide an index of cultural affinity.
Posted by gweil at 12:03 PM No comments:

I began work on the UC Digital Media Learning Lab Leadership Development project this week. This project is led by Mimi Ito and is sponsored by the MacArthur Foundation's program in Digital Media & Learning.
Posted by gweil at 7:33 PM No comments:

When Power Makes Others Speechless: The Negative Impact of Leader Power on Team Performance

We examine the impact of subjective power on leadership behavior and demonstrate that the psychological effect of power on leaders spills over to impact team effectiveness. Specifically, drawing from the approach/inhibition theory of power, power-devaluation theory, and organizational research on the antecedents of employee voice, we argue that a leader's experience of heightened power produces verbal dominance, which reduces perceptions of leader openness and team open communication. Consequently, there is a negative effect of leader power on team performance. Three studies find consistent support for this argument. The implications for theory and practice are discussed.
Download the paper: http://www.hbs.edu/research/pdf/11-087.pdf
Posted by Paul Chippendale at 12:47 PM 1 comment: